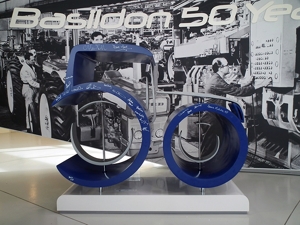 The New Holland factory at Basildon is today the largest producer of tractors in the UK and the plant has been a key player in the market for 50 years. As the mechanisation of farming developed more and more in the 60s, Ford moved their production facility from Dagenham to Basildon in 1964. Basildon was a new town created in 1947 and the Government was providing incentives for new businesses to be established. Ford took the opportunity and built a new state of the art facility over a 40 Ha site. The first production was the Ford 1000 series, which has been tremendously popular in Britain as well as in foreign countries. In the early 70s they introduced the Ford 7000, which was the first turbocharged tractor to be produced in Britain. With a power of 94 bhp and a new luxury cab it became a very successful model. Ford moved on to the 600 series, and then the 10 series. In 1989 they celebrated their silver jubilee with the creation of a special, silver coloured edition of the 7810, which is today a much sought after tractor by collectors. Ford purchased New Holland in 1985, but soon their strategy shifted to focus solely on car production. The global market of farm machinery was changing and larger groups were being formed. FIAT then purchased Ford-New Holland in 1991 and agreed to drop the Ford name by the year 2000.

As the New Holland plant at Basildon celebrate their golden jubilee it was a perfect opportunity for the North Bucks Vintage Tractor Club to visit the facility. The visit took place on Wednesday the 22nd of October and was organised courtesy of Richard Wray and James Emery. The event was extremely popular and Richard had soon people on a waiting list as the places were all booked long before we went. A clear sign that this new initiative, which started with the visit to the JCB factory earlier in the year, is proving very successfull for the Club members. A certain incentive for the Club committee to organise more in the future! As we arrived at reception a few Ford tractors were on display, as a reminder of the site heritage. However, today Basildon is a very different facility than when Ford started it. It is now part of a much bigger, worldwide manufacturer of agricultural machinery, CNH. Today Basildon is essentialy an assembly plant which receives components from different factories that were once part of different brands. The engine is made in Turin, Italy, by FPT (FIAT Power Train), the transmission and the rear axle come from Antwerp in Belgium, the front axle from the component factory in Modena, Italy, the cab from Croix in France. Basildon is the final stage where all the many components come together, the tractors are assembled, tested and then delivered. 23000 tractors are made every year, and the majority is destined to export. Currently the T6 and the T7 series are made here, together with a few tractors painted in red and branded Case-IH which are destined for the American market. 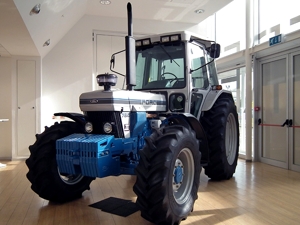 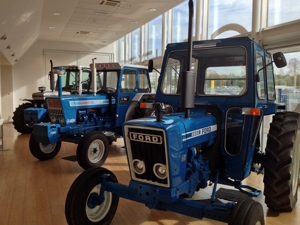 Our visit to the production line started from where the AGVs, Automatic Guided Vehicles take on board a new rear end, which arrives pre-assembled from Antwerp. Each tractor will have a specific build sheet which is programmed in the plant computers. All the operator has to do is to read a bar code on the transmission and the AGV will know to which bay it needs to take the rear end for the right engine and clutch to be installed. From then on the journey along the 2 km long assembly line begins. The front axle is added, then the rear linkage, possibly a front linkage and a few other subsystems until the basic chassis is ready to be painted. The chassis are cleaned and dried before they enter the area where two robot arms apply the primer coat. Two operators complete the job, ensuring the the paint coverage is perfect. After the paint is completed the journey is still quite long. The fuel system is added, then all the hydraulics... modern tractors look quite complex when you see what is hidden under the skin! There are other sub-assembly areas in the factory, where for example the cabs are put together, the bodywork is stickered, or the tyres are mounted on the rims. All comes together on the main assembly line, where at its end, after a 2 km journey, about 100 times a day a new tractor is born! 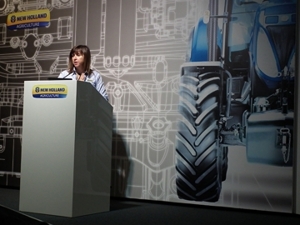 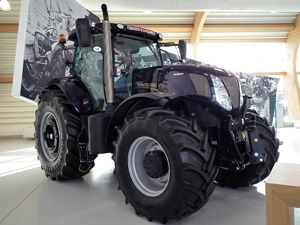 After lunch we were given a presentation about the history of the Basildon plant and about the CNH group, then we spent the rest of the time at the new customer centre, were a variety of New Holland products are on display. A few Club members had a go with the driving simulator, where your challenge is to manually drive a virtual tractor against one controlled by GPS and see who gets the better land coverage with a large (virtual) implement. I suspect none of us prevailed... On the occasion of the 50th anniversary New Holland produced a limited special edition version of the T7.270, 270 bhp tractor. Finished in "profondo blu" (Italian for deep blue), with leather seats, gold coloured grills and exhaust guard, it was a mighty sight. And for its price tag I did wonder if the grills and exhaust guard could be made of actual gold... If your budget does not stretch that far, there is also a T6.160 special edition. 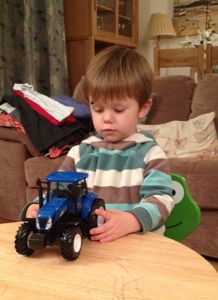 Overall it was a great visit, extremely interesting and well organised. I personally enjoyed it very much, and I could have happily spent the rest of the day sitting on the T7.270 golden jubilee. Even better if it had had a plough at the back and 100 acres of land around me. Unfortunately, neither can I afford it, nor do I actually need it... but I did not come home empty handed. I got a lovely 1:24 scale, radio controlled T7070 model, which is perfectly suited to my current needs. It's a shame though that I frequently need to share it with my two years old boy...!!

Below you can see a few more images from the day. More interestingly, though, James Every offered a few links that you can find below. I most definitely recommend that you take a look!

For an interactive video about 50 years of tractor production at Basildon, click here;
You can do a virtual factory tour by following this link here;
Finally, you can see another YouTube video of the World Harvesting Record attempted in Lincolnshire last August here. 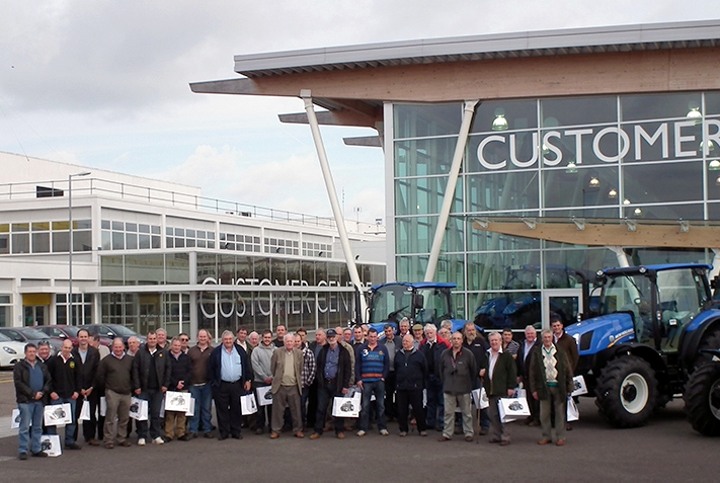 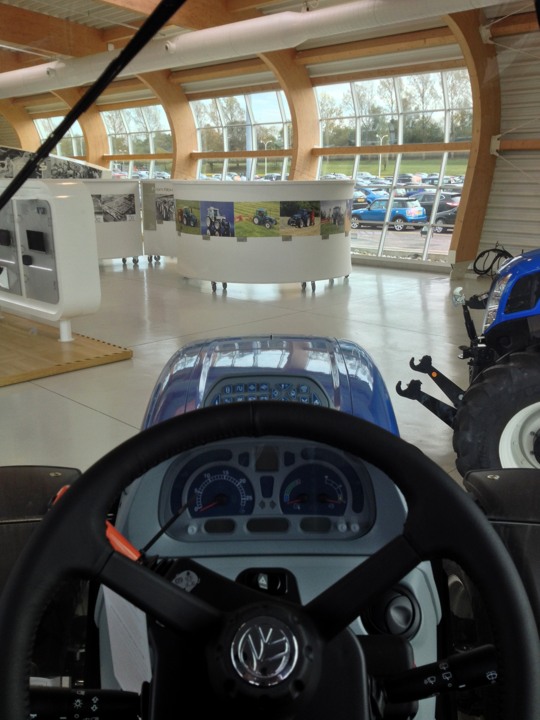 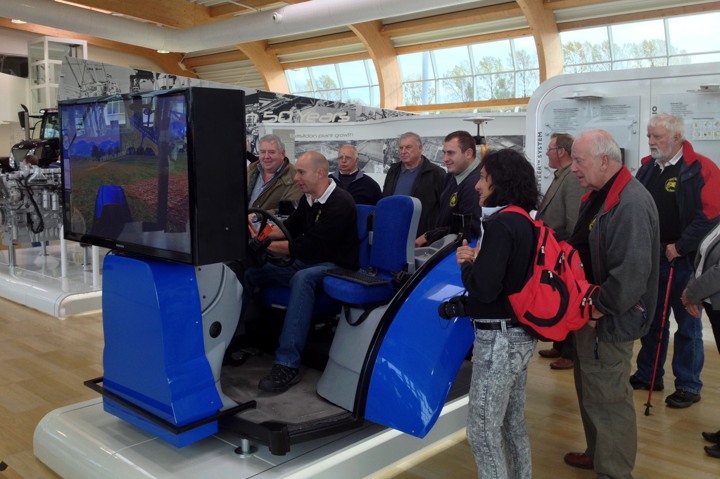 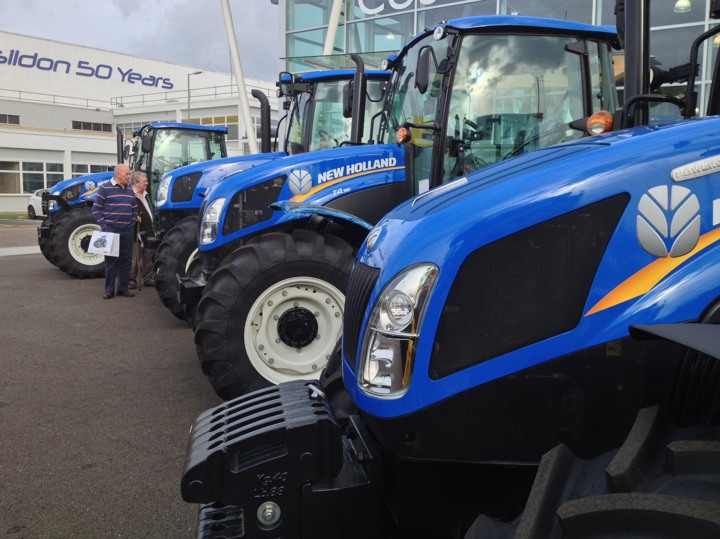 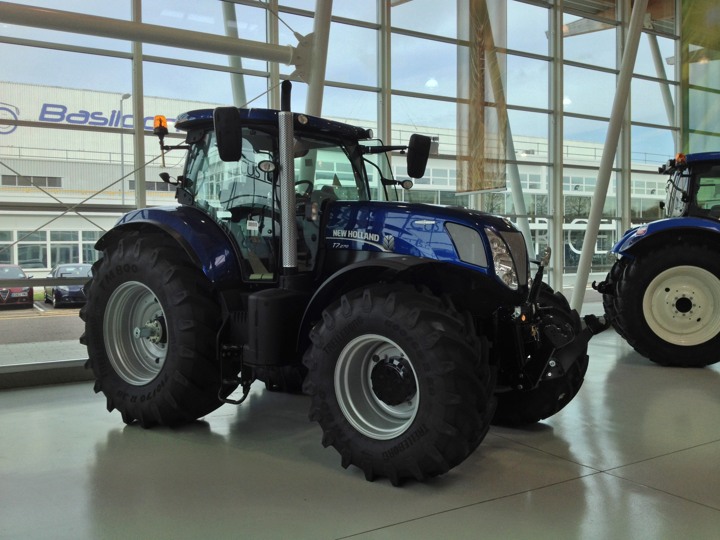 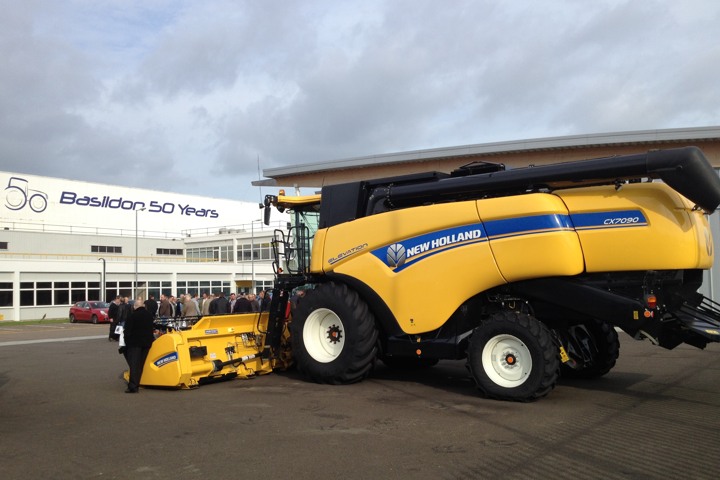