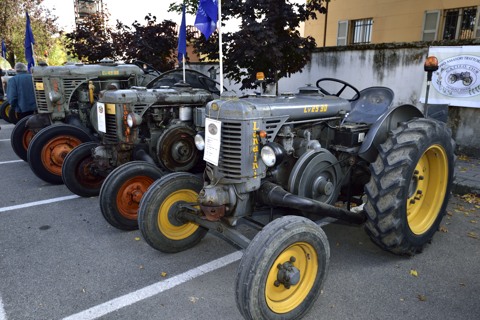 I have been pretty much far removed from vintage tractor events and activities this year, since we moved to Italy. I have been uploading loads of good images on this website, courtesy of Sandi, portraing all the great events where the NBVTC has been involved, and I must confess I have missed being part of all of them. Finally, the "draught" came to an end on the 11th of October when I had the chance to see a small vintage show in the little village of Barbianello, not far from the Italian university town of Pavia. There were a few vintage cars, bikes and tractors on display, courtesy of a local club, the GATTEO club. As you can see in the image here most of the tractors were Landini hot bulbs, which are to Italy what the grey Fergie was to England! I introduced myself to some club members, who immediately took notice of my keeness on taking photos of vintage machinery. I told them what I do and the guy said "Oh, well, if you'd like to take some pictures of tractors here is a man who's got 150". "Really?"... thought I...

Well, let me tell you that indeed he does. I was introduced to a gentleman name Franco Leone, who told me he owns a private collection organised in a museum of ethnic and rural life nearby, in the small town of Portalbera. His collection includes 150 tractors, 100 motorbikes and much more. He also gave me his contact number and said that he could let me visit the place when I wanted. I was rather struck by this remarkable finding and I obviously sought the earliest opportunity to pay Mr. Leone a good visit. That opportunity came last Saturday. 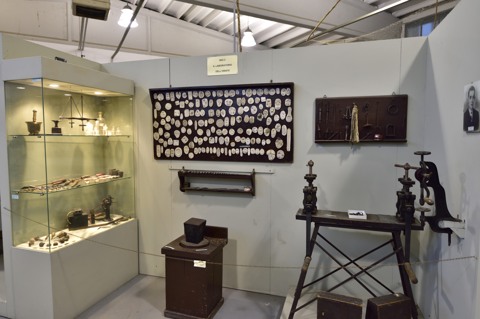 Franco Leone has been collecting vintage machinery and other vintage artefacts, some of which of high historical relevance, since 1949. The collection is organised as a museum which is open to the public free of charge. In average he hosts a couple of school visits every week, but he also receives a variety of visitors, from local enthusiasts who enjoy seeing the tractors and machinery they used decades ago on their family farms, to people from abroad. Entering the museum visitors are welcomed to a number of environments designed to recreate life from the past, such as a goldsmith laboratory (shown here), a carpernter shop, an electrician laboratory from the 40s and many more. Mr. Leone also owns a large collection of historical documents and pictures mainly related to the local history, but also some material of national interest. There is even a fossil leaf regurgitated by the river Po nearby, certified to be between 6 to 9 million years old!

All the vintage machinery is on display in two large barns. I did not count the tractors, but there are very many! Mr Leone said that about 20 are away on display in various shows or other museums, but the majority are there. You will obviously find a large number of italian tractors, such as Landini, Orsi, Fiat... e less known brands like Venieri, Oto Melara. But then you will find tractors from Russia, Hungary, Germany, Argentina, England, USA, Australia and more. And then there are still about 100 motor bikes and a variety of other equipment such as trashing boxes, balers, harvesters... Mr. Leone pointed out two particular items to me. One is a bicycle build by Bianchi for the American president Truman. Two were made but only one was collected (and is now in a museum in New York), the other was donated to Mr. Leone. Another remarkable vehicle is a Mercedes car build for Rommel's Africa Korps!

All tractors have been carefully maintend by Mr. Leone and his son and I am told they are all functioning. In fact one cannot help but being struck by Mr. Leone's passione for his collection and for what it represents. While we there he took immediately the opportunity to start a Landini hot bulb, which for me was a great and fun idea, but not so much for our children... In fact when the fire spitting, smoking old tractor burst into life producing the typical sequence of explosions at every stroke of its massive piston, they were really scared and demanded to leave the building and go home!!!!

It was extremely interesting and enjoyable, but two hours were good only for a quick overview, so I will need to pay a second visit. Would I recommend a visit? I definitely would say so! Meanwhile, you can see some images from my visit in this gallery! 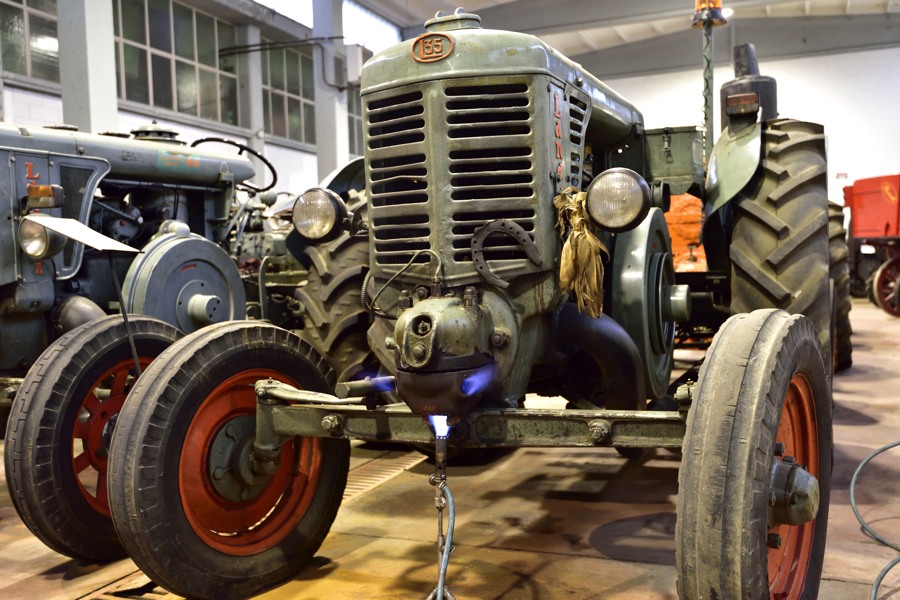